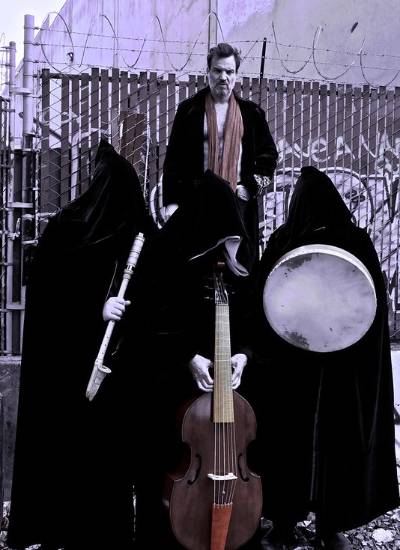 Francois Villon was the quintessential and vastly influential figure of late medieval France. He was poet, a rabble-rouser, balladeer, thief, and a sort of prototypical "protest singer." His poetry and his documented lifestyle became an inspiration for several generations of poets, such as Rimbaud and Verlaine in France; T.S. Elliot Ezra Pound, and Allen Ginsberg in England and America, and he's become something of a patron saint for countless counter-cultural young artists, and singers all over the world, most notably Bob Dylan and the underground dissident artists and singers in the former Eastern block. We are a group of international artists living in Portland a French actor and a French costume designer, a Czech director, a group of musicians, and a puppeteer, and we're working with Hand2Mouth Theatre, a company well-known for a highly experimental, modern and unusual production style, to bring alive the words of a 15th Century French poet and to share his insights into what it means to be a human being in 21st Century America. Look forward to a full production in Winter 2020.
-----
Part of Fertile Ground: A City-wide Festival of New Works