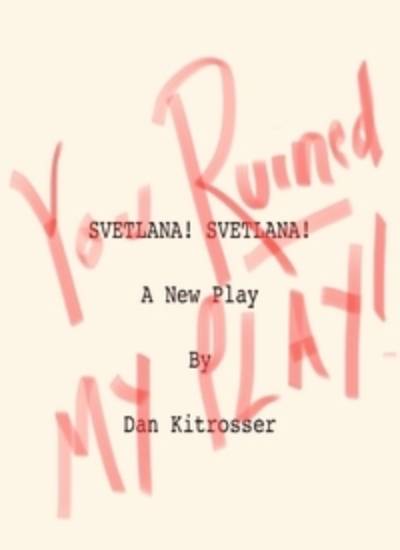 You Ruined My Play! or, Svetlana! Svetlana!

The Sanctuary @ Sandy Plaza (Portland, OR)

By Dan Kitrosser
Directed by Josh Hecht
Tickets: $20 or PWYC

*Due to an unforeseen scheduling issue, the cast and director for the following performance have changed.

LineStorm Playwrights presents a special performance of this wild, absurdist, romantic and historical comedy featuring Alissa Jessup and Dan Kitrosser. A dead playwright (Alissa Jessup) recounts the failure of her most recent, and therefore, final play, about the many-chaptered life of Josef Stalin's daughter, Svetlana. At the same time, the playwright's ex-boyfriend and grieving director (Dan Kitroser) tries to remount the play, with the help of a cat who claims to be the reincarnation of Vladimir Lenin. Performed by two actors, and taking us from New York to the Afterlife, and on Svetlana's journey from Russia to India to Princeton to Frank Lloyd Wright's cult of architects in Wisconsin, and yes, finally to Portland, Oregon, You Ruined My Play or, Svetlana Svetlana begs the question, do we ever break out of our cycles? Or, are we doomed to repeat our relationships and our choices for all eternity?