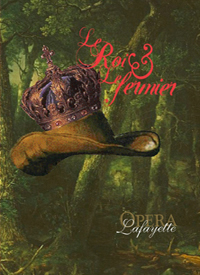 Le Roi et le fermier was both a popular and controversial opera in its day, heralded for a storm scene bridging the mood of Act I to the nighttime divertissement in Act II, and for its frank treatment of class issues culminating in Act III. After some adjustment for the censors, the work was premiered at the Opéra Comique in Paris in 1762, performed extensively there and in Vienna, and then, ironically, taken up and performed by Marie Antoinette and her troupe of seigneurs in the Théâtre de la Reine at Versailles in 1780. Monsigny's tuneful, varied music and Sedaine's clever and subtly subversive libretto work seamlessly to create a vivid evening of 18th-century musical theater.
Ryan Brown, Conductor
Didier Rousselet, Director and actor