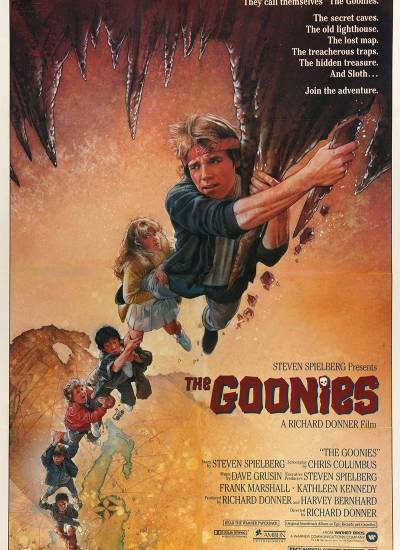 Salem Cinema on Broadway, (The Majestic Auditorium) (Salem, OR)

**ONLINE TICKET SALES CLOSE ONCE OUR DOORS OPEN THE DAY OF THE EVENT** Sunday, April 5th at 2:15PM | general admission $9; seniors 62+ $8 | no coupons, passes or CineBucks accepted for special events | PLEASE NOTE: Seating is always on a first-come, first-served basis. While purchasing advance tickets guarantees you a seat, where that seat is depends on when you arrive. The auditorium generally opens half an hour prior to showtime, but often people will begin lining up for special events even earlier than that. Please keep this in mind when deciding what time you would like to arrive at the theater.

Filmed in Oregon! A group of young misfits who call themselves The Goonies discover an ancient map and set out on a quest to find a legendary pirate's long-lost treasure.

We are proud to participate in the Oregon Film and Travel Oregon celebration of the 35th anniversary of The Goonies in support of the upcoming events taking place in Astoria in June!

It's been 35 years since audiences went in search of treasure with a lovable band of kids from Astoria into the caves beneath the northern Oregon coastline and Ecola State Park. To celebrate the 35th anniversary of the film, Oregon Film and Travel Oregon will offer public screenings of the movie in five cities around the statefrom Salem Cinema to BendFilm, Baker City, La Grande and Coos Bay. This combined effort and tour is to support The Goondocks and Goonies Day in Astoria June 4-7, 2020.

Possibly the most renowned of all #OregonMade films, "The Goonies" remains a seminal experience for generations of filmgoers and self-described Goonies around the world who never say die. Each year, thousands of people gather in Astoria to celebrate the film and iconic setting of the movie through combined efforts spearheaded by the Astoria-Warrenton Area Chamber of Commerce, the Clatsop County Historical Society and the Oregon Film Museum (who's building is the actual set for the opening jail-break scene of the film) with support from dozens of community members.

"This celebration is dedicated to the amazing Goonies fans and the special places where it was filmed," said Todd Davidson, Travel Oregon CEO. "We hope this June's events will find Goonies lovers on location reliving one of the most beloved coming-of-age stories of the 1980s."

About The Goondocks and The Goonies Day
Annual Goonies Day 2020 will coincide with The Goonies 35th Anniversary CelebraAon in Astoria, Oregon. Activities will primarily occur on Friday to Sunday, June 5 to 7, 2020, and this year's celebration will include light programming on Thursday, June 4. For all event details, visit TheGoondocks.org/2020.

About Oregon Film
The Film Office's mission is to promote, grow, and celebrate the film, television, creative content industries, and crew personnel within the state of Oregon, and strengthen its reputation among the industry both nationally and internationally. Find out more at OregonFilm.org

About Travel Oregon
The Oregon Tourism Commission, dba Travel Oregon, works to enhance visitors' experiences by providing information, resources and trip planning tools that inspire travel and consistently convey the exceptional quality of Oregon. The commission aims to improve Oregonians' quality of life by strengthening economic impacts of the state's $12.3 billion tourism industry that employs 115,400 Oregonians. Visit Industry.TravelOregon.com to learn more about the industry's positive impacts and go to TravelOregon.com to be inspired.