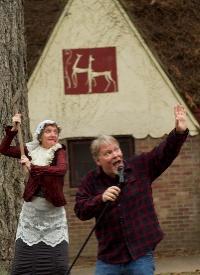 Don't You Dare - So I Did! is the theme that drives this this mash-up of reality and fairytale. Grimm Northwest mixes stories of risky decisions collected by the Brothers Grimm, performed by The Oregon Tellers (Anne Rutherford & Norm Brecke), with an open mic. Willing audience members tell their TRUE stories of a time something was forbidden, but they did it anyway - for better or for worse. Is the menace of Bluebeard and the malice of Frau Trude alive and well in the Northwest? Come find out. Open mic stories should be true, told without notes and under eight minutes. Or else.