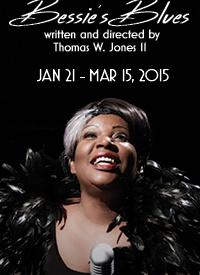 Bessie's Blues by Thomas W. Jones II. A musical odyssey of African American people in the 20th century. The explosive legacy of the blues told through the eyes and lens of Bessie Smith, the "Empress of the Blues". The 20th anniversary of this production (originally staged at Studio Theatre and receiving 6 Helen Hayes Awards), is being reprised in honor of our long-standing collaboration with Tom Jones as a playwright, lyricist, director, and choreographer.