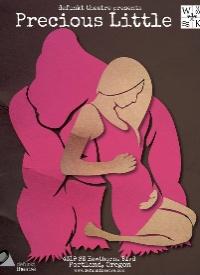 Brodie is a Doctor of Linguistics in her mid-40s. Single, gay and at the top of her field she decides to have a baby on her own, but early in her pregnancy she learns that the child she is carrying may have a genetic abnormality. She encounters a colorful array of characters (a much younger girlfriend, an elderly speaker of a dying language, and a gorilla at the zoo) in her quest to determine whether she could accept and love a child that may never be able to speak to her. Funny, thought provoking and deeply moving, Precious Little is a Portland premiere that playwright Madeleine George describes as "a play about the limits but also the luxuries of language, about what we cherish about our uniquely human capacity for language as well as what it costs us to communicate in this way."