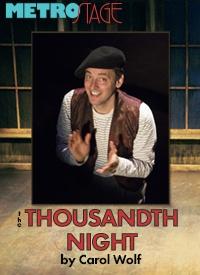 An actor arrested in Paris for presenting subversive material attempts to avoid his fate by playing 38 characters from the Arabian Nights, from Ali Baba to Shaherazad. A remarkable blend of comedy and pathos set in occupied France in 1943.

"an innocent caught up in the evil of the Nazi regime, juxtaposed with the frothy Arabian tales." - LA Times