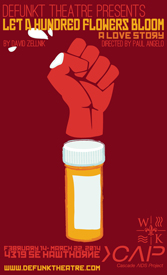 It's 1996 and advances in AIDS medications leave a group of men who faced near certain death a sudden, unexpected hope for a future. Puppy is a writer of pornography with a Marxist slant; an accident has left him confined to a wheelchair but his sexual fantasies know no limit. Sexually frank, hilarious, and deeply moving, this award winning play is a West Coast premiere, and playwright David Zellnik will be visiting Portland during the run.

-----
This production contains adult content and is recommended for audiences of age 17 and up.