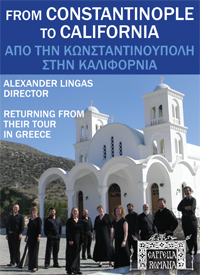 GRE Live in Greece: From Constantinople to California (CAPPELLA ROMANA)

Join Cappella Romana on a 1,000-year journey from Constantinople to California. Ancient Byzantine chants mark the point of departure for musical encounters with Crusaders and Venetians. East meets West again at St. Sophia Cathedral in Los Angeles, where Frank Desby founded a tradition, continued by his Californian peers, of Greek- American choral music. The tour comes full circle with the mystical ecstasy of Radiant Cloud, a sonic icon of the Transfiguration by Athenian composer Michael Adamis.
In September 2011 Cappella Romana toured Greece for the first time, performing this program at the international Sacred Music Festival of Patmos ( ), and on the island of Paros at the 6th-century Church of 100 Doors and in the village church of Áspro Chorió, where the ensemble also recorded a new disc, "Cappella Romana Live in Greece."